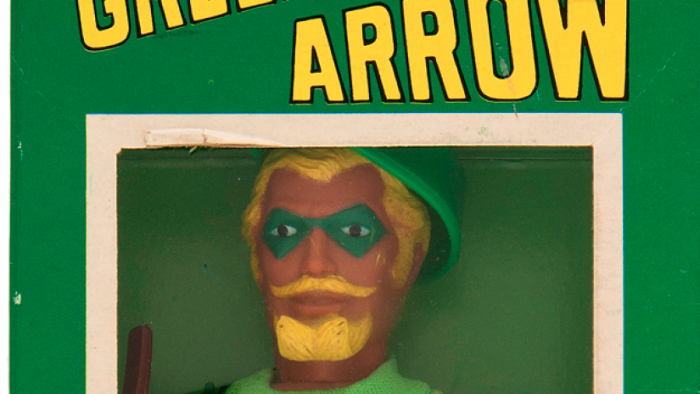 …and the one character that I coveted above all others: Oliver Queen—the Green Arrow.

Though I love and respect him immensely, asking Mark Bellomo for an article is a double edged sword. Sure, his answers are always insightful but they can be – for lack of a better word – frightingly and extremely elaborate. It does however make me very appreciative of him taking some of his precious time.

But I digress, as part of the Coming Out (English for Uit De Kast) article I received some copy for, and which will be posted here sometime next week, there was one segment that really stood out.

A personal story of a young Mark Bellomo and his search for his favourite toy. A story which will show you that the smartest and most knowledgeable expert on toys is a romanticus at heart and which might bring him to our lowly and humble level.

My Mego Green Arrow – A Lovestory by Mark Bellomo 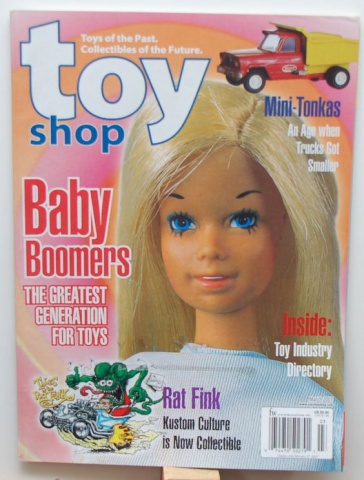 “I first began delving into collecting out-of-production action figures on the secondary market in high school. Since my hometown (a village located in Upstate New York) was situated far away from any comic book or collectible store, I would ride my bike fifteen miles on some pretty dangerous roads to arrive at the closest store that received trade publications—a small Waldenbooks located in a mall in Auburn, New York—and pick up the latest issue of Toy Shop: the same magazine that I would eventually work for fifteen years in the future.

In the back pages of Toy Shop—remember that this was the eighties during the pre-Internet era—there were business card-sized “Toy Box” advertisements: the 1980’s answer to eBay auctions. During the late 1980’s, I cultivated a desire to acquire all of the 8” Mego figures that I had never owned as a child in order to finish my Mego [Official] World’s Greatest Super-Heroes collection: the very first action figure line I finished by acquiring pieces on the secondary market. Among the characters I wanted to obtain via these “Toy Box” adverts were the Lizard, Mr. Fantastic, Kid Flash, Speedy, Wonder Girl, Aqualad, and the one character that I coveted above all others: Oliver Queen—the Green Arrow.

For the next few decades I romanticized what the Mego Green Arrow doll looked like, since I could only picture him in my imagination.

Perhaps I was desperate to own the toy because I had only seen the figure ONCE at retail during my entire life. In a Barker’s discount department store back in the late spring/early summer of 1977 when I was six years old. My dad and I were visiting Barker’s because he needed something-or-other to fix a whatsit-or-whatchamacallit for one reason or another. (Back then, all of my memories revolve around collectibles—I paid little attention to anything [or sadly, anyone] else.) As always, while my parent was scouring the hardware aisle or the grocery aisle or the clothing aisle or the housewares aisle, I gravitated toward the toys. But we were in a rush. I recall quite clearly looking at a huge pegboard display of picked-over carded Mego super-hero figures, and there were only a handful remaining: of the few lingering characters, on a beautiful forest green card, was a super hero I’d never seen as an action figure before—and one that I recall showing up only once on an episode of The Superfriends. He was a beautiful figure, and really stood out on the pegs. 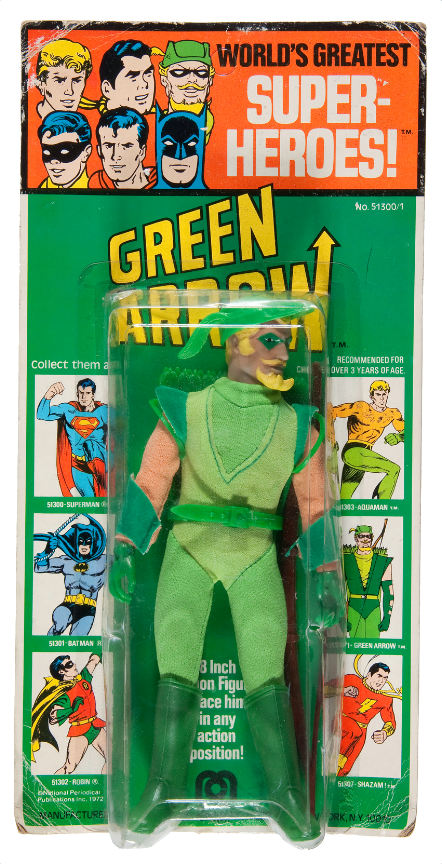 But my dad was in a rush. And I had no money. I think I broke down in tears, but my dad smartly ignored my whining, got me into the car, and we sped away… with visions of this unattainable, never-before seen Mego figure dancing in my mind. I never saw him again as a child. Moreover, due the fact I had only glimpsed the character on retail pegs for a brief moment, for the next few decades I romanticized what the Mego Green Arrow doll looked like, since I could only picture him in my imagination.

Additionally, since there weren’t ANY collector’s guides available back in the late 80’s, I had ABSOLUTELY NO IDEA what the Mego Green Arrow action figure ACTUALLY looked like. That’s pretty darned amazing, n’est ce pas? What a strange “collectibles” world we lived in back then—there was such a dearth of information available at the end of the 80’s/beginning of the 90’s that sometimes, you simply couldn’t obtain information—factual or otherwise—about a toy franchise. And if you couldn’t find information you were seeking, your imagination filled in the blanks.

What exactly DID this Mego Green Arrow look like? I pictured him in my mind’s eye through elementary school. Middle school. Then freshman year of high school. Sophomore year. Junior year.

I desperately wanted one. And as a senior in high school, I would get him.

My mind’s eye recalled him hanging on the retail pegs of Barker’s in all of his glory. Inside the clear bubble, I pictured him perfectly: the Green Arrow’s costume possessed a pair of protective soft plastic gauntlets that were removable, pliable, and ran the entire length of each arm—from his wrists all the way up to the middle of his biceps (his gloves allowed his green-molded hands to be free—to hold his bow). His bycocket hat (Robin Hood-type cap) was made of dark green felt and possessed a real feather stuck into its brim, similar to the feather placed into Tonto’s headband by toy manufacturer Gabriel/Hubley for their Lone Ranger Rides Again action figure line (1973, 1979). Green Arrow’s mask was constructed of thin soft plastic and was also removable—again, similar in style and execution to the Lone Ranger’s first-rate mask produced by Gabriel/Hubley. Finally, within the doll’s quiver, the figure’s arrows were individually removable (!) from his backpack (& possessed actual fletching), while the Emerald Archer’s bow had a drawstring feature that enabled children to manipulate the action figure’s bow to shoot arrows a good distance away—similar to the Red Sleeves doll with his “arrow firing feature” (also, from Gabriel/Hubley’s Lone Ranger Rides Again.) God, Mego’s Green Arrow was gorgeous.

I desperately wanted one. And as a senior in high school, I would get him.

Remember, there were no images of the toys that dealers were selling in these “Toy Box” adverts. No digital cameras. No website. No catalog. So you cold called people on the telephone, asked for the condition of the piece in question, and trusted them to grade the toy fairly and honestly. And then mail it to you only AFTER they had received a postal money order you’ve mailed to them. It was a process, indeed.

Now that I was working a few different jobs, I could not only keep up with currently-released G.I. Joe and Transformers product… but I could begin searching for old school toys I’d always dreamed of acquiring. Minimum wage was $3.35 an hour in ’89 (woo-hoo!!!), and working 6 days a week at a local drugstore, I managed to save the money to buy a MIB Mego Green Arrow within two short pay periods. My excitement could hardly be contained: real MONEY! And all I had to do was work as many hours as possible (stupid, stupid child labor laws limiting you to 18 hours per week), and I’d make all the cash I needed to support my burgeoning toy habit.

I found my Green Arrow figure being offered for sale for $80 + $3 for Priority Mail shipping & USPS Insurance in a Toy Box advertisement from a guy in the Midwest. I sent him a money order which took more than a week to arrive, then the gentleman called me to confirm that the payment arrived, and THEN I had to wait yet another week or so to receive the item. When I finally obtained my Mego Green Arrow in late 1989 after waiting thirteen long, patient, years (!) dreaming about some vague memory of the toy I had when I was five years old—I was unconsciously building the artifact’s “coolness factor” up in my mind until the toy resembled something of an ideal Platonic Form to the extent that NO earthly object could ever satisfy what my imagination had constructed in the recesses of my mind—so of course, I was a BIT disappointed upon receipt of my MIB Mego Green Arrow.

…so of course, I was a BIT disappointed upon receipt of my MIB Mego Green Arrow.

Sure, the figure was UNTOUCHED by human hands, with NO green color-bleeding or shoulder-staining commonly found in samples of Mego Green Arrows. His plastic bow string was unbroken. He was (and still is) in GOREGOUS, C-10 condition. And I SHOULDN’T complain. Remember, it’s VERY difficult to obtain C-10 DEAD MINT Mego super heroes without spending a fortune buying ‘em MOSC, since ALL Mego figures in boxes may ONLY be graded MIB: all of Mego’s later window boxed AND early-edition solid boxed action figure packages were easy-to-open with flaps; no factory tape was used to secure the packages and ensure that the doll had never been removed from its box.

After washing my hands thoroughly, I slid the Mego Green Arrow out of his box. After a decade-and-a-half, I’d finally obtained the Holy Grail of my Mego collection. And as I looked at the figure and manipulated him in my hands, I noticed something. This was not the figure that I had built up in my mind. The Green Arrow’s Robin Hood hat was not made of felt. The cap’s feather was plastic, non-removable, and was molded with the rest of his hat. His domino mask was not removable; it was painted onto his face. Oliver Queen’s gloves were not removable: they were formed by pieces of dark green felt sewn onto the figure’s lower arms. His hands were molded in green plastic: yet they were the exact same hands that [nearly] every other “Type Two” male Mego action figures possessed. The Green Arrow’s bow—a truly fragile accessory (most were found broken—even within sealed samples)—did not have a separate drawstring which allowed the weapon to fire:  it was a brown plastic bow with a molded plastic string. Furthermore, the major reason why this hard plastic bow couldn’t fire arrows was because the character’s arrows were molded into his green, hard-plastic backpack. None of the arrows were removable; none of the arrows had fletching. Of course, the Green Arrow’s drawstring feature did not exist, either. It seemed that nothing on this figure existed the way that I had imagined. Apparently, my overly sentimental, emotional affection toward this toy encouraged my act of self-deception—of false-memory syndrome (FMS is the psychological term for this condition). Yet, this fraudulent memory of the Mego Green Arrow proved just how significant toys were to me as a child, and underscore how they remain important to me as an adult.

As long as I could starve myself for a few months, then all of those figures I didn’t own as a kid would be mine as well!

Regardless, I finally had him in my collection; I finally had my Mego Green Arrow. As long as I could starve myself for a few months, then all of those figures I didn’t own as a kid would be mine as well!  Mego Lizard. Then Mego Mr. Fantastic. Then the four Mego Teen Titans. Following the completion of my Mego super-heroes… I now realized that if I wanted to, I could work three or four or five jobs in order to make enough money to finish obtaining each and every piece for every major action figure line ever created. So I finished my vintage 3 ¾” G.I. Joe line. My G1 Transformers line. My vintage Masters of the Universe line. My vintage M.A.S.K toys. Thundercats. Silverhawks. And many, many others over the next twenty years.” 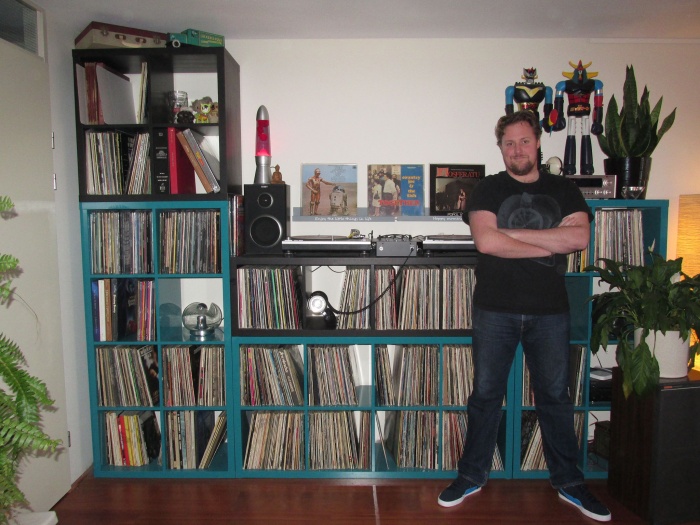 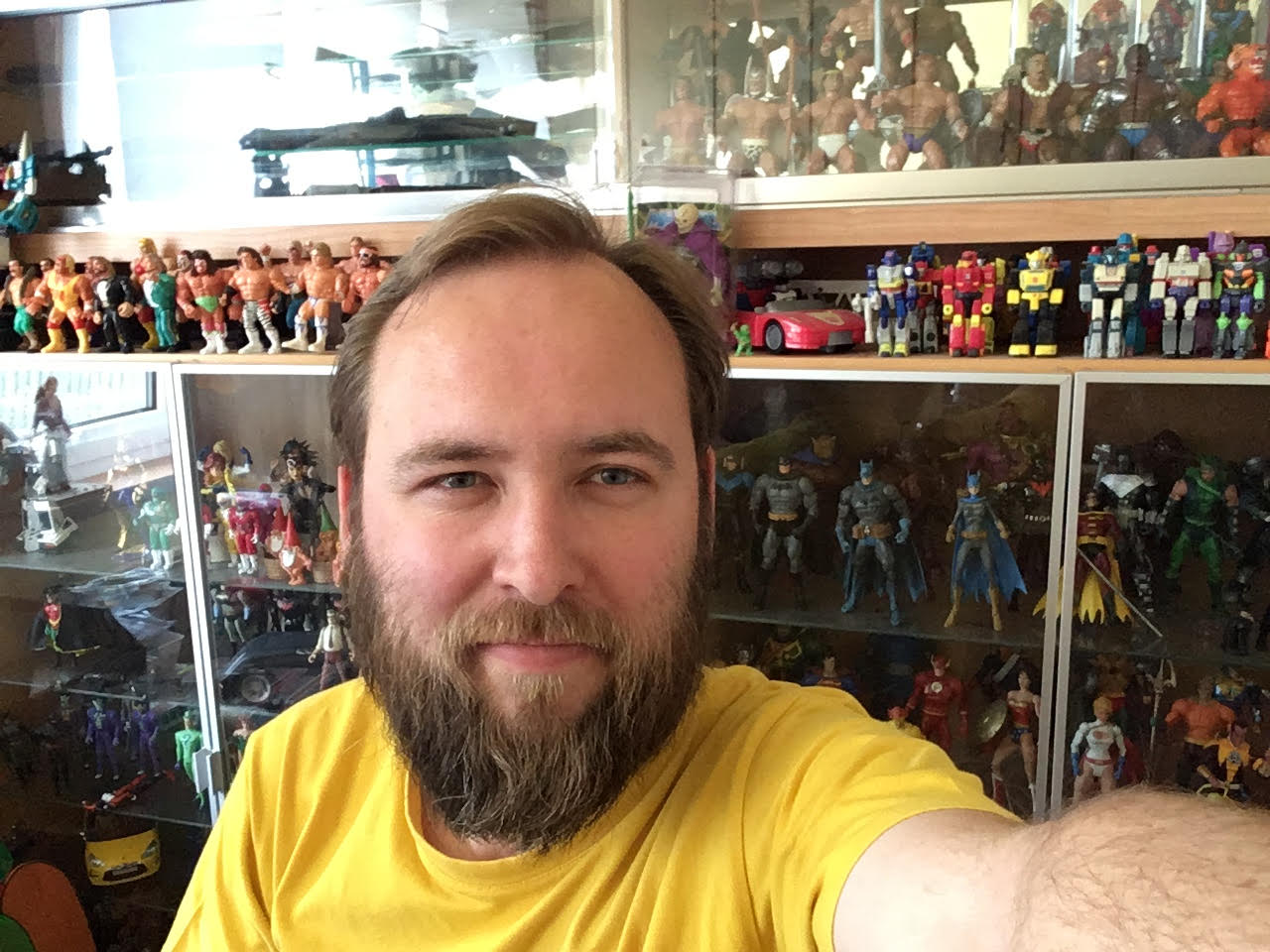